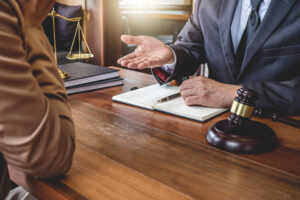 The prosecution is the side that will be making a case against you in court, but that doesn’t mean you want to avoid them like the plague. While you don’t want to offer up anything to them that could be used against you in court, they can absolutely play a crucial role in helping you achieve a favorable outcome to your case. We explain why it may be in your best interest to talk to the prosecution before trial.

Talking To The Prosecution

In most instances, there is some time before the judge takes the bench on the day of the trial where you would have the opportunity to talk with the prosecutor of your case. You want to keep your guard up a little during this conversation, but at the same time, there is a middle ground that both sides may be able to benefit from. The prosecutor likely has a number of cases on their plate, and if they can secure a win at trial by getting the defendant to plead guilty, that’s a win-win for them. However, you need to get something out of this too, because why prepare for trial if you’re just going to plead guilty?

In these cases, you may be able to get the charges reduced, which in turn would reduce the potential penalties you could face. Obviously you run the risk of pleading guilty to a charge when there’s a chance you could be found innocent, but taking a deal for lesser charges helps a person avoid the worst case scenario, which is especially beneficial if it appears the odds are stacked against them.

This is best acheived by talking to the prosecutor before the judge takes the bench, which usually occurs around 8:30. So you’ll want to get to court early and see if you can carve out a couple minutes with the prosecution. They are interested in learning more about your intentions regarding your case, so don’t assume that they have no interest in talking to you. Again, if they can get a case off their plate, or if they just want to gauge your interest in pleading out or whether you’re pleading not guilty, they’ll be happy to talk to you for a couple of minutes.

With that said, make sure you come in with a plan and some reasons why you think a plea deal is beneficial for both sides. Don’t just say that you can’t afford a DUI and you have nobody to look after your kids if you have to spend time in jail. Approach them with a level-head, ask them if they’d consider downgrading the charges if a plea deal would be on the table, and let them know you’re interested in working towards a deal if that’s something they’d consider before you move forward with a not guilty plea.

Better yet, consider having an attorney do this process for you. We’ve successfully gotten charges reduced and even dropped altogether during this pre-court consultation, and we can work the achieve the same results for you. We know how to leverage your case to put a little extra pressure on the prosecution to consider a deal that’s more favorable for you. And if they aren’t winning to budge, we’ll gladly present a strong case for you in court and do everything in our power to help you win.

If that sounds like something worth pursuing, reach out to the experienced legal minds at Appelman Law Firm today.