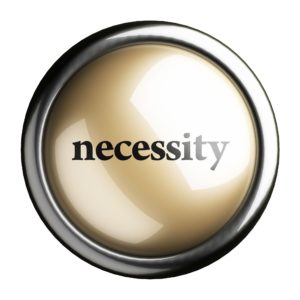 When it comes to defending clients against the levied charges, it is our duty to explore all the possible ways we can put forth a credible defense. Sometimes finding a defense plan is easy, while other times it takes a lot of digging and case review.

The necessity defense stakes it’s claim to the notion that the defendant’s actions were necessary in order to prevent greater harm from coming. It is also called the Lesser of Two Evils Defense, and it has a unique role in the criminal trial process.

Factors That Must Be Present

The necessity defense is similar to self defense, but just because there’s an emergency or someone needs help doesn’t mean you have carte blanche to do whatever you want. Under Minnesota law, certain factors must be present in order for someone to successfully be able to argue the necessity defense. There must exist:

For example, if you drove drunk to the hospital because your wife was in labor, and you caused an accident that killed three others, you’re not going to be able to invoke the necessity defense. Even in the above examples, the prosecution may argue that you could have called an ambulance instead of driving the pregnant neighbor or the friend with a head wound to the hospital, so it’s not always an easy case to win. That being said, if your actions were deemed necessary and the lesser of two evils, you may be able to get the charges thrown out.

For more information or to talk to a criminal defense lawyer about your defense plan, set up a free strategy session with Avery and his team by clicking here.