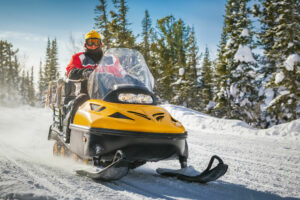 We might have the phrase “Minnesota nice,” around these parts, but it’s clear that we’re not so nice when it comes to theft of a certain item.

According to a report by the National Insurance Crime Bureau, Minnesota leads the nation in reports of snowmobile theft. For their report, the NICB examined theft reports from 2015 to 2017 and found that Minnesota had more than 300 reports of stolen snowmobiles. That averages out to about two snowmobile thefts per week for the duration of the study. Michigan was second on the list with about 200 snowmobile thefts during that same time frame.

Other interesting findings from the study on snowmobile theft include:

Here’s what the NICB had to say about snowmobile theft in Minnesota.

“Minnesota, home to the headquarters for Polaris and Arctic Cat, had the most snowmobile thefts in the nation. With 314 thefts, the land of 10,000 lakes recorded over 100 more snowmobile thefts than the next state, and accounted for 20% of all the thefts nationwide from 2015 to 2017. At 48% and 26%, the two ‘hometown’ companies, Polaris and Arctic Cat made up an overwhelming majority of the listed vehicle makes for stolen snowmobiles within the state. Bombardier and Yamaha were the reported vehicle makers for 19% and 6% of the thefts, while under 1% of the records list the vehicle make as unknown.”

A spokesperson for the NICB said that snowmobiles are vulnerable to theft because they are often stored in transport trailers and sometimes left in remote locations for long periods. When a person is caught with a stolen snowmobile in Minnesota, they can face motor vehicle theft charges. Depending on the circumstances of the theft, these charges can carry the potential penalties of up to five years in jail, fines up to $10,000 and damages equal to the value of the stolen snowmobile.

As you can see, snowmobile theft carries some stiff penalties, so if you’ve been accused motor vehicle theft for stealing a snowmobile, it’s imperative that you seek out legal assistance. We can help with that. For more information on how we can help challenge your motor vehicle theft charge, setup a free case evaluation with our experienced legal team today.