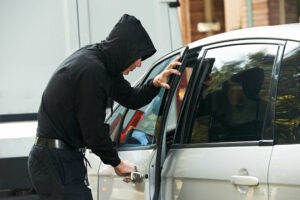 An Australian man showed up to court to face charges of vehicle theft in another vehicle he had stolen, according to the police report.

Police said they noticed a blue sedan in a fast foot parking lot across from the Christies Beach Police Station and soon discovered that it was actually registered as stolen. Police approached the vehicle and talked to the 34-year-old driver and his 23-year old passenger. After speaking with the pair, police came to learn that the 34-year-old had just attended the nearby Chrisities Beach Magistrates Court to face charges of illegally using a motor vehicle.

The man was again charged with illegally using a vehicle, and he faces an additional charge of driving while disqualified. He did not apply for bail and is expected to reappear in court this afternoon. The passenger was granted bail on the assurance that she shows up to court next month.

“We’re hoping that when his partner attends court next month she catches the bus and we just break this vicious cycle,” Senior Constable Stokes said.

This is certainly one of the more interesting cases we’ve read about in a while, and although they are slightly different charges, both Australia and Minnesota look down harshly on vehicle theft crimes. Automobile thieves often face serious penalties because many times the charges are based on the value of the item stolen, and a car is inherently more valuable than most things you can fit in your pocket from the local drugstore. Misdemeanor thefts involve up to 90 days and jail and fines up to $1,000, and it only goes up from there. Many vehicle thefts are charged as gross misdemeanor crimes, which carry fines up to $3,000 and up to a year in jail.

Needless to say, if you end up like the man in the above story, you need to make sure you consult with an experienced defense lawyer like Avery Appelman. He’ll walk you through your defense options and put together a strong case to oppose the prosecution. If you’re interested in learning more, set up a free case strategy session with his team by clicking here.