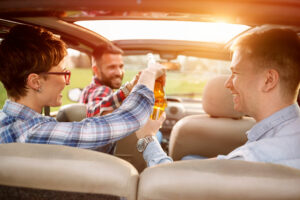 That being said, that doesn’t mean you’re always in the clear as long as you’re in the passenger’s seat. In rare instances, you could be charged with aiding and abetting DUI if you encouraged the commission of a crime. For example, if you continually bought the driver drinks and encouraged them to drive home even though you knew they were drunk, there’s a possibility you’ll end up facing aiding and abetting charges. This is extremely rare, but not impossible.

A more common scenario where the passenger ends up in handcuffs is when they get confrontational with the arresting officer. Even if they are well intended, if they are interfering with an active investigation, they can end up in handcuffs. Other common scenarios include when the passenger is found to have drugs on them during the traffic stop, or if they try to run from police and are charged with resisting arrest. They can also be cited if there are open beer cans in the vehicle.

If you know that you and your friends are over the legal limit, don’t pick the least drunk person to get you home. Make a plan before the night begins, and if plans change, make the smart decision to call an Uber or find another way home with a sober driver. Don’t chance it, because even if you’re not the one that will be arrested for drunk driving, there’s still a lot at stake, including your life and the well-being over everyone else on the road.

If you or your driver needs legal assistance in Minnesota after a DUI traffic stop, reach out to the experienced lawyers at Appelman Law Firm. We’ve helped defend clients against all sorts of DUI charges in the past, and we can do the same for you. For more information, contact our office today at (952) 224-2277.