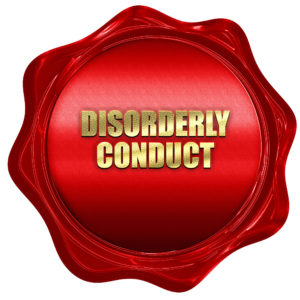 In the grand scheme of things, a disorderly conduct violation isn’t a very serious charge. If violence or the threat of violence occurred, odds are your charge would be upgraded to assault or battery, so in most cases a DC charge is reserved for those who simply cause a nuisance. A misdemeanor charge doesn’t carry much in terms of potential penalties, so while you may think it’s no big deal if it ends up on your record, there’s one clear reason why you should almost always consider fighting the charge in court.

Before we explain why it’s almost always in your best interest to contest a disorderly conduct charge, it’s worth noting that each case should be evaluated on an individual basis. Consider setting up a free case evaluation with one of our attorneys before making any decisions regarding your case.

The single biggest reason why you should always consider fighting a disorderly conduct charge is because you usually have nothing to lose. What we mean by this is that oftentimes, the sentence for pleading no contest/guilty and being found guilty are the same, so you might as well see if you can win the case and be found innocent.

For basic disorderly conduct charges, the prosecution will generally offer a deal where they’ll offer the defendant a year of probation in return for a guilty plea. Some prosecutors will even write the deal such that the charge will be changed to a dismissal after a year of probation. A defendant will see this, realize there’s no jail time and think “Sure, that sounds good,” without looking at the other side of the coin. The other side being that if you fight the charge and are found guilty, the vast majority of the time your sentence will be a year of probation and no jail time. If you’re going to end up in the same spot if you lose, why not try to win the case outright?

We’ve fought and won numerous disorderly conduct cases in the past, and we can do the same for you. Even if you’re one of the rare cases where fighting the charge isn’t in your best interest, we’ll tell you that during your free case review and make sure you know where to go from there. With Appelman Law Firm, you have nothing to lose and everything to gain, so pick up the phone and see what we can do for you. If you or someone you know is facing disorderly conduct charges, have them get in contact with our firm by calling (952) 224-2277.