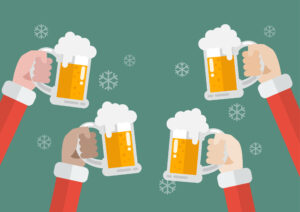 Christmas is a wonderful time of year to spend with family and friends, but if you celebrate with one too many holiday spirits, you can end up facing a DUI charge if you make a poor decision and get behind the wheel. Nobody ever wants to be arrested for drunk driving, but that sentiment is especially true during the holiday season. In today’s blog, we explain what you should do if you or someone you know is arrested for DUI during Christmas-time, and how the attorneys at Appelman Law Firm can help.

Just because the courts are closed on Christmas doesn’t mean that police will go easy on drunk drivers. In fact, as we talked about in a previous blog, police will be conducting extra DUI patrols through the New Year’s holiday to help keep drunk drivers off the road. Police will be out with extra force, so it’s imperative that you make smart decisions and don’t get behind the wheel if you’ve been drinking, even if you are just heading a mile or two down the road.

You know the best ways to avoid a DUI, but for the sake of this blog, we’re going to pretend that you’ve already been arrested for drunk driving. We’re going to focus on what your next steps should be in this situation.

The first thing you’ll want to do is to contact a criminal defense lawyer like Avery and the team at Appelman Law Firm. You can either contact us directly at (952) 224-2277, or you can have a friend or family member reach out. Calling a lawyer is the quickest way to get out of jail, which can be especially tricky over the holidays when court isn’t in session. If a judge can’t see you and set your bail amount, you may have to wait in jail until courts open back up, and that can be days later. Don’t miss out on the holidays or put your work situation in jeopardy because you got arrested over Christmas and couldn’t get released right away.

Sync up with a lawyer, let them get in contact with the on-call judge in the county, and get released as soon as possible so that you can get back to your normal life. After the dust has settled, we’ll set up a time for you to swing into our office or for a phone call conversation about the next steps in your defense. We’d be happy to challenge your DUI and work to avoid a worst case scenario. We can handle all the aspects of your defense so that you can focus on other things during the holidays.

When you’re in custody or talking to police during the traffic stop, it’s also important that you don’t say anything to incriminate yourself. Don’t tell them how much you’ve had to drink, don’t tell them what you’ve been drinking, don’t tell them anything more than needs to be said. If they start asking probing questions, just say that you’ve been advised by your lawyer to only answer basic identification questions and they’ll handle anything else. Don’t make your situation worse by giving police information that will make their case easier to prove.

That’s basically it. Be quiet, and contact a lawyer as soon as possible, and your Christmas-time DUI won’t be as big of a headache. For advice or legal assistance over the holiday stretch, reach out to the team at Appelman Law Firm. We answer our phones 24/7/365. Give us a call today at (952) 224-2277.