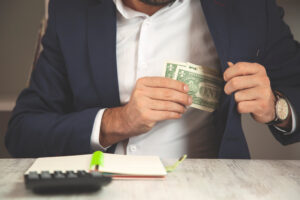 Embezzlement is a form of theft that involves the misappropriation of funds or trusts that belong to a person’s employer. If you’re a financial advisor and you’re skimming money off the top, if you’re a school bookkeeper and you’re using funds to cover gambling losses or you’re using money for any purpose other than for the best interests of your employer, there may be embezzlement charges in your future.

Under Minnesota law, three specific elements make up the crime of embezzlement, and we’re going to take a closer look at each of them in today’s blog.

The Elements Of Embezzlement

Here’s a look at the three factors that make up the crime of embezzlement:

Intent – As with any crime, intent must exist. An accidental oversight that involves the exchange of money or other goods does not mean you’re guilty of embezzlement. If you tried to transfer a client’s money and you sent it to the wrong account and an audit finds that you were the reason for the lost funds, you won’t be charged with embezzlement if you did not intend to misplace the funds. You could be fired from your job, but you won’t be criminally charged for an accident or oversight.

Funds Must Change Hands – You may have access to company funds, and you may even handle it physically or in a digital sense, but these funds need to change hands in order to constitute an element of embezzlement. You may have access to your company’s safe or a client’s portfolio, but until you move that money somewhere it’s not supposed to be, it’s not a crime.

A Fiduciary Relationship – Finally, a fiduciary relationship between the parties must exist. As a fiduciary, you are required to attempt to act in the best interest of your employer or the person relying on you. If people trust you with money or access to funds, you are expected to attempt to use that money in their best interests or per their wishes, not for side projects or for your own self interests.

It’s also worth noting that you can be charged with embezzlement even if you replace the money or don’t lose money for your employer or clients. For example, let’s say you had access to $50,000 in city funds, and you had a hunch that the Vikings were going to beat the Packers on Sunday. You withdrew the money, flew to Vegas for the weekend, bet on the Vikings, won your bet and then returned home Monday morning and returned that initial $50,000 that you took from the city account. That’s embezzlement, even though the city did not lose money as a result of your scheme. You were entrusted to act within the city’s best interests, but you intentionally took the money and allowed it to change hands, even though you returned it later. That’s textbook embezzlement.

The potential penalties for embezzlement in Minnesota vary based on the amount that is illegally used, as small cases can be charged as misdemeanors while others can be felonies that carry huge fines and up to 20 years in jail. If you or someone you know is facing embezzlement charges, have them reach out to an experienced criminal defense lawyer like the ones you’ll find at Appelman Law Firm. Give us a call today at (952) 224-2277.