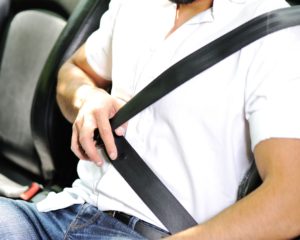 If you are going to be doing any driving over the next two weeks, make sure you do so with a seat belt secured across your lap, otherwise you may end up with a ticket. That’s because Minnesota law enforcement agencies are participating in the Click It or Ticket campaign to help cut down on traffic fatalities among unbelted drivers and passengers.

The extra seat belt crackdown will run from today, November 16 through Sunday, November 29 and will involve more than 300 law enforcement agencies across Minnesota. It’s important to remember that the seat belt law is a primary offense, meaning that law enforcement doesn’t need to witness any other driving infractions in order to stop a driver if they see the driver or passengers are not wearing their seat belt.

You may not think that a seat belt citation is that big of a deal because the base fine is only $25, but that doesn’t account for court costs and other fees. Many first offense seat belt citations run more than $100, and nobody needs to deal with another financial setback during the coronavirus pandemic.

The crackdown comes during a period where unbelted traffic fatalities are on the rise. Between January 1 and November 1 of this year, 85 unbelted motorists have died on Minnesota roads. That’s a stark increase from the 61 unbelted motorists who died during that same stretch in 2019.

With Thanksgiving on the horizon next week, we’re about to have an influx of drivers on the road traveling to and from their holiday destination. It’s also likely that the weather will continue to make driving conditions less favorable, so it’s imperative that you buckle up every time you get behind the wheel. Not only will it help to keep you safe in the event of an accident, but it can also keep a little extra money in your wallet during the seat belt crackdown.

Finally, it’s important to note that drivers are responsible to make sure that their younger riders are buckled, otherwise they can be ticketed for the actions of their passengers. Drivers will be ticketed directly for any passengers aged 14 and under who are caught riding in a vehicle without a seat belt. Passengers 15 and older will receive a ticket directly from the officer, meaning that passengers need to know they can still receive a ticket even if they are not driving at the time the vehicle is stopped.

So if you or someone you know has been ticketed for being in a moving vehicle without a seat belt, know that you have options for contesting the ticket. Oftentimes it’s your word versus the word of the police officer, so make sure you don’t admit to anything that could be used against you in court. If you truly were wearing a seat belt when you were stopped or police have no evidence to back up their claim that you were unbelted, consider contesting the citation in court. You can try this on your own, or you can sync up with an attorney who can put together a professional defense. For more information or to set up a free case review, reach out to Avery and the team at Appelman Law Firm today.