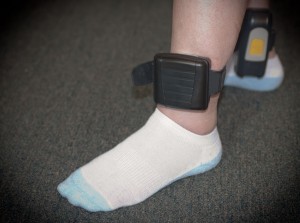 If you’re convicted of a crime, you’re likely to face a range of punishments, be it jail time, a fine, probation or any other option the court deems fit. If you’re convicted of a crime involving drugs or alcohol, the judge will likely impose restrictions on future substance use. You may be forbidden from consuming alcohol for a set period of time, but how can the court ensure you’re sticking to your probation guidelines? After all, your probation officer isn’t going to follow you 24/7. One such way the courts keep tabs on people is through a device called a Transdermal Alcohol Monitoring Device.

The device has many names, but it’s usually called the TAD or CAD, short for Transdermal/Continuous Alcohol Device. Transdermal, which is a fancy way of saying “through the skin,” suggests that the device measures skin emissions to determine what substances are in a person’s body. Although the device can’t detect what you had for lunch that day, it does test for the presence of alcohol, marijuana or other illegal substances.

Transdermal technology has been around for a long time, as the science behind alcohol emissions through the skin have been studied since the 1920s. The science was thoroughly tested, and in 1985 researchers at Indiana University School of Medicine published dual studies that analyzed how volatile substances moved through the skin and how they were emitted through perspiration.

One of the more popular TAD devices, known as the SCRAM bracelet (short for Secure Continuous Remote Alcohol Monitor), takes a skin emission sample every 30 minutes throughout the day. Typically the devices are attached to a person’s ankle, and every half hour a tiny air pump collects an emission sample and tests its contents.

Unlike a home monitoring device, the SCRAM bracelet does not monitor your exact location, and cops aren’t going to descend on your house the minute alcohol touches your lips. Instead the device has to be synced up with a special wireless router that relays the recordings to the proper authorities. Typically these devices send their data in the early hours of the morning, between 3 am and 5 am, because the user is likely sleeping in his or her home where the router is located.

Some users note that the device can be tricked by placing a piece of paper or plastic over your skin. That method isn’t recommended though. While your alcohol content will read zero, the device will be able to tell that it did not get a true sample, which means you’ll likely be in violation of your parole for attempting to tamper with the device.