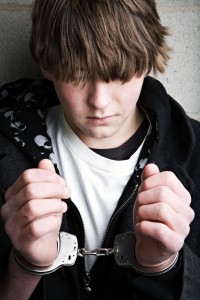 No parent ever wants to receive that call from a police officer stating that their child has been arrested, but hundreds of parents in Minnesota get that call every day. Juvenile crimes are a result of a myriad of factors – peer pressure, impulse decisions, school or home relationships, inability to comprehend consequences, etc. – but it’s how you and your child handle the days and the weeks after the arrest that can determine their likelihood of ending up back in handcuffs. Today we’re going to share a few tips for how to talk to your children after they’ve been arrested.

My Child Has Been Arrested

We’ve already discussed the legal side of juvenile arrests in a past post titled “What to do if your child has been arrested,” but today we’re going to focus solely on how to work with your child after an arrest to prevent recidivism.

1. Remain Calm – This is easier said than done, but try to keep your cool. In the grand scheme of things, your child probably didn’t commit a very serious crime. The majority of youth arrests are for things like vandalism, marijuana possession, underage drinking or shoplifting. We’re not saying you should ignore the crime, but we’ve all committed regrettable decisions in the past, so stay calm and avoid blowing the situation out of proportion. There will be consequences, both legal and in the home, but blowing off the handle solves nothing.

2. Get The Honest Details – Once your child is back home, sit them down. Look them in the eye and calmly tell them that you’re willing to help them in this situation, but only if they are honest. Tell them they get one chance to be honest with you, and if you find out they are lying, there’s going to be serious consequences. Write down all the details, as you’ll need to pass them on to an attorney if you want to contest the arrest. Also, if other teens were involved, ask your child what they are going to say about the incident. Sometimes teens can get blamed for drugs or actions that were committed by someone else in the group because others are afraid to rat out a closer friend or they want to make your child the scapegoat.

3. Explain Why Their Actions Were Wrong – Have an honest conversation about why their actions were wrong. Shoplifting a pack of gum from Wal-Mart is wrong; explain that taking something from someone else without permission, no matter how small, isn’t right. If drugs are involved, explain how it chemically effects their decision making, which can lead to bigger issues if they get behind the wheel or if it affects their actions. Don’t just sit there and yell at your child, saying “It’s wrong to do ____ because it’s illegal.” Explain why it’s wrong, how their actions affect others and how it can lead to greater problems.

4. Talk About Moving Forward – Before you end the conversation with your child, you need to set some clear expectations for what happens next. If you plan on hiring an attorney, tell your child that you are going to look into legal counsel, and they will be expected to cooperate and be truthful when talking to the attorney. Most attorneys offer free initial consultations, so after you meet with a lawyer, if you decide to contest the arrest, talk with your child about how the fees are going to be handled. Maybe you’ll take $100 out of every one of their paychecks until the court fees are paid, or maybe they’ll need to get a second job. You might not expect them to foot the entire bill, but holding them at least partially fiscally responsible can help them see the direct consequences of their actions, more so than any “grounding” ever could. Once finances have been discussed, set some clear rules around the house. Whether that be an 8 pm curfew, loss of television or phone privileges or the expectation to perform a certain number of hours of community service, explain those consequences to your child, and be clear about the punishments for failing to meet those expectations. Lastly, talk to your child about what would happen if they were to end up in a similar situation, how they should handle it, and what they can expect to happen at home should they be arrested again.