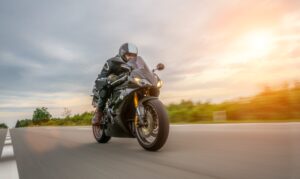 A 22-year-old Rochester man was arrested this week after authorities clocked him going 144 miles per hour in a 65 mph zone.

According to Olmstead County Sheriff’s Lt. Lee Rossman, a deputy clocked the man going 144 mph while heading northbound on U.S. 63 near 80th Street Southeast at around 3:10 p.m. on Tuesday. The deputy began to follow the motorcycle but did not attempt to conduct a traffic because of the high rate of speed. Eventually the officer caught up to the motorcyclist at a red light at South Broadway and Third Avenue, and he asked the motorcyclist to turn off his motorcycle.

The officer said that after he exited his vehicle, the motorcyclist revved his engine, causing the motorcycle to lurch forward and knock the deputy into his squad car’s door. This action also knocked the rider off balance, and he laid the bike down. The rider continued to ignore police commands until the officer pulled out his taser, and a passerby assisted the deputy as he placed the motorcyclist in handcuffs.

The motorcyclist told police he was going nearly 150 mph because it was hot out and he was trying to cool down. He also claimed that he was wearing headphones and did’t hear the commands from the officer.

Speeding that fast will come with a significant fine, but there are additional penalties associated with speeding over 100 mph in Minnesota. A conviction will bring about a driver’s license suspension for at least six months, and that could increase depending on weather or not the motorcyclist faces additional charges for his actions on the road.

In addition to the steep fines and the driver’s license suspension, you can bet that anyone caught speeding over 100 miles per hour will hear from their automobile insurance company. When they hear about dangerous or reckless driving behaviors, they will typically increase your insurance rates, which can last for years. This can lead to hundreds or thousands of dollars in additional expenses, all because you decided to put the pedal hit the metal.

As you can see, a few moments of adrenaline-pumping speed can lead to significant consequences, so make sure you are aware of your speed. The summer weather may provide ideal driving conditions in Minnesota, but if you get too far over the speeding limit, it can be costly. If you find yourself facing a speeding citation or similar driving offense in Minnesota this summer, make sure your first call is to Avery and the team at Appelman Law Firm today at (952) 224-2277.