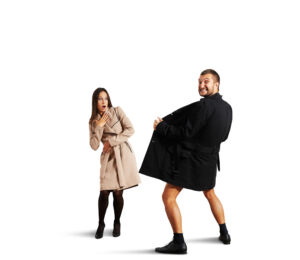 Indecent exposure is classified as the act of deliberately exposing portions of your private body parts to the general public. You may not think that exposing yourself is offensive, but you are not the person who gets to make that determination. If others are offended or negatively impacted by your exposure, you can face significant penalties and even end up on the sex offender registry. We take a closer look at the law and the potential penalties here in Minnesota in today’s blog.

What Is Indecent Exposure?

Under Minnesota law, indecent exposure is classified as:

Some of those definitions are a little open for interpretation, but essentially, if you expose private body parts, you procure someone else to expose themselves, or you engage in certain sexual behaviors in public, you can be hit with an indecent exposure charge. For example, if you flash your genitals at a female in the grocery store, or a couple is caught having sexual relations at a public beach, they can face indecent exposure charges.

The potential penalties for indecent exposure in Minnesota vary depending on the circumstances of the incident. For example, if you exposed yourself to a child or you have previous convictions, you can face upgraded charges.

It’s also worth noting that while flashing your breasts in public may be considered indecent exposure, breastfeeding is specifically allowed under the law, so you can not be charged if exposure happens during the course of breastfeeding.

So if you’ve been charged with indecent exposure, know that severe penalties are on the line, and you’d be best off with an attorney by your side. If you want someone who can guide you through the system and get you the best outcome possible given the circumstances, reach out to the experienced legal team at Appelman Law Firm today. To set up a free case review session, give us a call at (952) 224-2277.