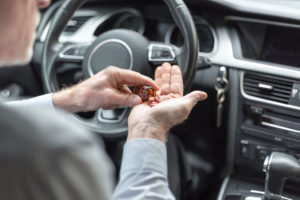 When you think of a DUI, you probably imagine a drunk driver behind the wheel of a car, but DUI actually stands for Driving Under the Influence, so any substance that affects your ability to safely drive a car can lead you down the path of a DUI. As the law states, you are considered under the influence if a substance inhibits a person from possessing the “clearness of intellect and control” that they normally would. As you might have guessed, substances like drugs fall into this category.

As you might have guessed, the laws regarding what constitutes drugged driving are a little more defined since a standardized test, like a breathalyzer for alcohol, does not exist. In Minnesota, a person can be arrested for driving under the influence if they are found to be in control of a motor vehicle:

Some of the substances listed as schedule I or schedule II drugs include cocaine, codeine, morphine, oxycodone, methadone, ecstasy, LSD and heroin.

If you are charged with operating a vehicle under the influence, you can face the following penalties in Minnesota:

A first offense for drugged driving is considered a misdemeanor offense, but that’s assuming you don’t get in an accident or injure yourself or another person. Consequences for subsequent violations increase in severity, as a second offense results in a mandatory 30-day jail sentence (two days in facility, then can be altered to eight hours of community service in exchange one day off your jail sentence). You’ll also face a one-year license suspension. A third offense results in 90 days of incarceration, with a similar community service deal after six days, and a two-year license suspension, on top of hefty fines.

As you can see, a drugged driving DUI charge is serious, but there are a few different ways we challenge these cases. We may challenge that:

These are just a few ways we can work to challenge your case, but to have a more specific plan for winning your drugged driving case, reach out to Appelman Law Firm today.