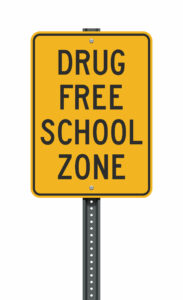 With some crimes, there are aggravating factors that can lead to enhanced charges for the individual charged with the crime. For example, if you have young kids in the car or have an extremely high blood alcohol content, your DUI charge will be upgraded from a misdemeanor to a gross misdemeanor, which carries additional potential penalties. A similar upgrade can be seen when we compare drug charges to drug crimes that occur in designated “Drug free zones.”

Under Minnesota law, a drug free zone is considered within one city block or three hundred feet of any Minnesota:

The zone begins at the boundaries of the property and extends three hundred feet or one city block, whichever is greater. The punishments will also be applied to anyone who is found possessing or selling illegal drugs on a school bus transporting elementary or secondary students, and on or inside a drug treatment facility.

According to the law, anyone found selling narcotic drugs, methamphetamine, amphetamine, cocaine, crack, opium, LSD, heroin or more than five kilograms of marijuana inside a school zone will face the following potential penalties:

For repeat offenders, they can face up to 40 years in jail and will face a minimum three year sentence.

Needless to say, being caught in possession or selling drugs in a classified drug free zone carries some serious penalties, so you’re going to want to hire an attorney if you’re facing upgraded drug charges. We’ve helped people and students facing drug sale or possession charges in a drug free zone beat the charges or get them greatly reduced, so let us do the same for you. To learn how we’ll fight the charges or help you out of a sticky situation, give us a call to set up a free case strategy session at (952) 224-2277.