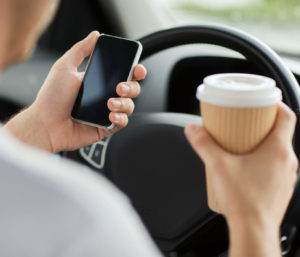 In an effort to crack down on texting while driving and help spread awareness that police are always looking for infractions, Eagan police took to a specialized bus to catch distracted drivers last week. Their efforts proved fruitful, as more than 150 drivers were cited for distracted driving over a five-hour period last Wednesday.

For their enforcement, Eagan police officers posted up inside an empty school bus and watched out the windows to see if people were driving distracted or if they violated the state’s school bus stop-arm law. If they witnessed a violation, they radioed ahead to patrol cars stationed down the road, and they stopped violators as they passed. By the end of the enforcement, police had made 152 traffic stops and issued tickets for things like distracted driving, failing to wear a seat belt and failing to yield to a bus with its stop-arm engaged, among other things.

According to the police summary of the crackdown, some drivers were doing more than simply texting while driving. Police said one woman was cited after she was seen taking selfies with her dog while driving, while a man was cited because he had CNN on a dash TV while also updating his phone calendar when spotted by police.

Machtemes did note that many drivers took special care when near the bus and followed all the rules on the road, which is ideal considering who is traditionally aboard a school bus.

“School buses carry some of our most precious cargo, and we will continue to promote school bus safety through traffic enforcement and public service announcements,” Machtemes said.

So when you’re behind the wheel, make sure you put the distractions down and focus on driving. Not only can it save you the cost of a ticket, but it just may save someone’s life. If you or someone you know was caught in this sting and wants to challenge their citation, or if you were cited for another traffic violation, pick up the phone and give Avery Appelman and the team at Appelman Law Firm a call today.