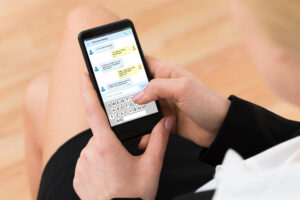 We get it, life can get busy. Between work, school and shuttling the kids to practices, it can be easy for obligations to slip your mind, especially if they aren’t something you’re used to doing, like going to court. It may not seem like a big deal if you forget to show up for a traffic citation or misdemeanor arrest, but failing to appear if you are required to do so can lead to increased fines and even a warrant for your arrest.

Each year, millions of Americans fail to appear in court for low level offense, which lead to arrest warrants being issued. This wastes court resources, leads to additional costs and creates more problems for the offender. But a recent study found that a simple reminder text message could greatly help to reduce this trend.

Plagued by a sizable percentage of no shows in court for low level offenses, New York City recently decided to try and adjust their current approach. They began by redesigning their court summons form to make it more presentable and easier to understand, and then they also started sending text-based reminders to individuals to remind them of their court appearance.

According to the data, the text message reminders reduced these missed court appearances by between 13-21 percent, suggesting that a lot of people were simply unaware that they were required to appear in court. Over a three-year period, this redesigned system resulted in roughly 30,000 fewer arrest warrants being issued for individuals who didn’t show up for their scheduled court appearance.

Obviously there are some limitations, because a court system would need to collect a person’s cell phone number in order to send them a text message, but given the rise of the smartphone, it seems likely that electronic messaging could prove more fruitful at conveying a message than a standard letter mailed to an address. People move all the time, and letters can get lost in the mail, but most people have had the same phone number for as long as they can remember, and it’s now a preferred method of communication for many people.

This isn’t the first time we’re seen text message reminders help in a big way. If you’re a reader of my colleague Dr. Lance Silverman’s blog, he did a story on how text reminders can actually help to prevent diabetes by up to 40 percent! Needless to say, text messaging appears to have benefits in numerous facets of life, and we expect it to be the way of the future for keeping people in the loop in the courtroom.

If you are wondering if you have to show up for court, or if you want help navigating an arrest or warrant, reach out to Avery and the team at Appelman Law Firm today.