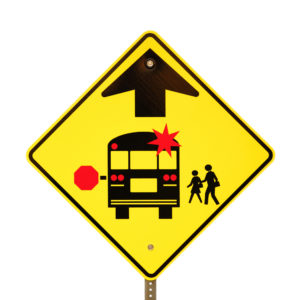 School is back in session, and that means that those big yellow buses are out and about during your morning and afternoon commute. Buses are carrying some very precious cargo, which is why Minnesota doesn’t look lightly upon drivers who commit infractions near a school bus or in school zone. Below, we take a closer look at some of the more common school bus and school zone related driving infractions, and we explain how to defend yourself against any charges.

When it comes to passing a school bus, a lot of drivers don’t really understand the rules. Buses have two sets of lights, an amber warning set and a red caution set. Bus drivers are required to put on their amber warning lights when they are within 100 yards of a stop. You can still pass a bus on the left hand side when the amber flashers are on, but it is illegal to pass a bus on the right when these lights are displayed. Doing so can lead to a citation.

If you aren’t going to be able to pass the buss in time, be prepared to stop, because the yellow lights mean the red stop lights are coming soon. Once these are displayed and the stop arm is extended, it is illegal to pass the bus in either direction on an undivided road. Also, you need to stop at least 20 feet behind the bus, otherwise you can be cited. 20 feet isn’t all that far, so consider giving buses more space, especially because the warning lights let you know that a stop is imminent.

Passing a school bus when its stop arm is extended isn’t a cheap citation either. Last year, Minnesota raised the cost of this ticket from $300 to $500.

Now is also a common time for speeding violations in a school zone. For the last couple months, you may have been able to go a little faster on some streets because children weren’t present, but that changes now that class is back in session. Speeding violations can vary based on a number of different factors, including how fast you were going and what jurisdiction you are in, but know that it’s not going to be cheap.

If you’ve been charged with a school bus or school zone related citation or crime, don’t just pay the ticket, because you may also end up with increased insurance premiums. That small citation can actually lead to thousands of dollars in increased costs, so it’s worth your while to contest the ticket in traffic court. Avery and his team have been helping people fight in traffic court and get their tickets greatly reduced or dropped altogether, and he can do the same for you. For more information or to set up a free consultation, click here or give his office a call at (952) 224-2277.