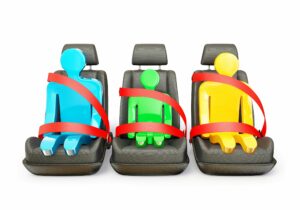 Now that Labor Day has come and gone, we’re past the period known as the “100 deadliest days” in terms of traffic accidents and fatalities, but that doesn’t mean police are taking their eyes off road safety anytime soon. In fact, another safety campaign kicks off today.

More than 300 agencies across Minnesota will begin local Click It or Ticket campaigns as part of a national effort to reduce injuries as a result of not wearing a seat belt while in the car. Despite the continuing trend of more people buckling up behind the wheel, 96 motorists lost their lives in Minnesota last year due at least in part to their decision not to wear a seat belt. That represents the highest figure since 2014, and it’s just one of many reasons why Minnesota police and traffic enforcement believe this latest crackdown is important.

“For motorists who don’t buckle up — sometimes it’s stubbornness. Sometimes it’s forgetfulness. Sometimes it’s the feeling of invincibility and thinking you’re in total control of what happens on the road,” said Mike Hanson, Office of Traffic Safety director. “Whatever the reason, it can kill you. Be smart and take a couple of seconds to click it.”

Alongside the Click It or Ticket crackdown, which runs from Monday, September 16 through Friday, September 28, police are also reminding parents and care providers to properly buckle up children every time they are in a vehicle. Recent statistics from the Minnesota Department of Traffic Safety Office of Traffic Safety help hammer home that point.

Aside from helping keep you safe, seat belts also help keep extra money in your wallet. Minnesota has a primary seat belt law, which means police don’t need to witness you perform any other illegal act behind the wheel in order to stop you if they see you driving without a seat belt. It’s very unlikely that you’ll get away with a warning during the crackdown, and although the base fine amount is only $25, that number can jump to triple digits when fees and court costs are added on. It can also lead to increases in your automobile insurance, so take two extra seconds each time you get in the car to make sure you and all passengers are properly buckled up.

If you’re facing traffic charges because you weren’t wearing a seat belt, or your insurance rates are set to skyrocket, reach out to Avery Appelman and the team at Appelman Law Firm to see what we can do for you. Be sure you’re buckling up every time you get in the car, but especially during these next two weeks!