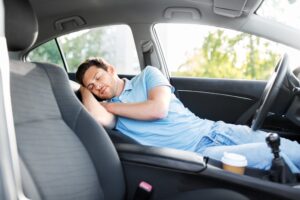 In order to be charged with Driving While Intoxicated or Driving Under the Influence, one might assume that an individual may have to actually be driving the car prior to being stopped by police. In other words, if you’re under the influence but you’re just sitting in a parked car, can you still be hit with a DWI charge? We explore the answer to that question and more in today’s blog.

DWI In A Parked Car

Obviously you can’t just quickly shift the car into park and get out of a DWI if an officer sees you driving and you turn out to be over the legal driving limit. But what if you just got in the car and haven’t shifted out of park yet? Or better yet, what if you just got in the driver’s seat and never turned the ignition on because you decided to sleep off your buzz in a car? Can you still earn a drunk driving charge in these situations?

It may surprise you to learn that in both of these instances, it’s entirely possible that you end up charged with a DWI even though you never drove anywhere or even started up your vehicle. As we’ve talked about on the blog in the past, as long as you are deemed in “physical control” of the vehicle, you can be charged with drunk driving if you turn out to be over the limit. But what does it mean to have physical control over a vehicle? Some definitions vary a little, but it basically means that you have the apparent ability to operate the vehicle you are in at that moment in time.

So even though you haven’t driven anywhere yet, if you’re in the driver’s seat and the keys are within reach, you are likely considered to be exercising physical control over the vehicle. A great criminal defense lawyer will work to counter this definition in court, but just know that you could find yourself in hot water just by getting behind the wheel while you’re drunk, even if you haven’t yet shifted out of park or even turned on the vehicle.

Don’t “Sleep It Off” In Your Vehicle

It’s always a good idea to avoid sleeping in your vehicle, especially in Minnesota where the temperatures can fluctuate greatly over the course of a day, and when there are a number of ridesharing options available with the touch of a smartphone that can help get you home safely. But if you do find yourself in the unique situation where you need to spend some time in your vehicle while you’re intoxicated, be smart about where you sit and where the keys are located. Avoid the driver’s seat or make sure that the keys are not within reach. In this scenario, you’ll be able to make a clear argument that you were aware of your intoxication and were consciously attempting to avoid any misconception that you were in physical control of the vehicle. Try to avoid this situation if at all possible, but if worse comes to worse, avoid any confusion about your physical control over the vehicle.

If you are over the limit, don’t go sit in your vehicle with the heat running while you wait for an Uber, because that puts you in physical control of a vehicle. Don’t go sit in your car in your driveway if you’ve been drinking because you got in a fight with your girlfriend. Even though you never put the car in gear, you could still end up with a DWI charge if the cops show up.

We’ll do everything in our power to counter any type of DWI, but we want to make sure you’re aware of this information so that you don’t end up with a DWI in a parked car. For more information about DWI laws in Minnesota, or for help with your DWI case, reach out to Avery and the team at Appelman Law Firm today at (952) 224-2277.