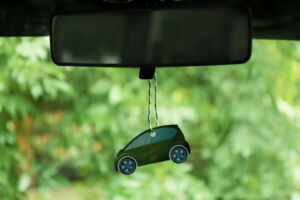 Minnesota has a very broad law that speaks to how a driver needs to care for their windshield and the sight lines it allows for. For example, Minnesota Statute 169.71 states that “A person shall not drive or operate a vehicle with any objects suspended between the driver and the windshield.” There are exceptions to this law, as you are allowed to have rearview mirrors, mounted GPS units and electronic toll collection devices between yourself and the windshield, but air fresheners do not make the list. Because they can obscure part of your visibility, it’s against the law to have air fresheners or other objects like dice or rosary beads hanging from the mirror.

According to the law, violation of the statute is a misdemeanor offense punishable by fines up to $1,000 and up to 90 days in jail. The vast majority of motorists are let off with a warning or are told about this violation when police stop them for another offense, but as we saw with Wright’s traffic stop, that’s certainly not always the case. It’s worth noting that police can legally stop you in Minnesota if they observe you driving with an object hanging from your rearview mirror.

Police may also use this information to prolong your interaction and look for probable cause to place you under arrest. For example, explaining this violation to a driver could allow more time for a drug sniffing dog to arrive on scene, or it could get you to admit something that could be used against you. If you don’t want police stopping your or prolonging your interaction, remove any objects from your rearview mirror.

If you or someone you know has been involved in a traffic stop for a violation of this law or for a similar traffic infraction, consider reaching out to an attorney to learn about your legal options. It may seem like an open and shut case, but there’s nothing to lose by at least talking with an attorney during a free consultation. To set one of those up, reach out to Avery and the team at Appelman Law Firm today.