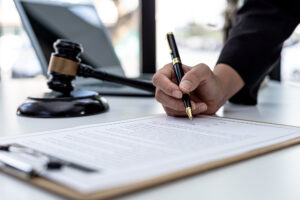 If you are facing criminal charges, you are probably wondering about how you can go about achieving a favorable resolution to your case. Most people assume that their fate lies in the hands of the judge overseeing their case (and your attorney if you hire one), but there’s actually another option worth considering – a plea deal. A plea deal is an agreement that is reached between the defense and prosecution that provides a satisfactory outcome for all parties. As long as the judge believes the deal is fair, they’ll sign off on it and that will be the end of your case.

As you might imagine, these plea deals have some specific pros and cons for your situation. Below, we take a closer look at some of the benefits and drawbacks of accepting a plea deal for your criminal case.

Pros Of A Plea Deal

Here’s a look at some of the reasons a plea deal can beneficial for someone facing criminal charges.

Avoid The Unknown – If your case goes to trial, there’s no telling how it could play out. You could get a favorable outcome, but you could end up facing harsh punishments. You avoid the unknown by accepting a plea deal.

Some Control Over Your Sentence – If you work with a defense lawyer, they may be able to help you have some say in the plea agreement. If you really want to avoid jail or hang onto your driver’s license, that may be included in the plea deal if you agree to some other concessions. You have a little more control in the outcome if you can negotiate during a plea deal, and that’s easier to do if you have a lawyer on your side.

It Ends – A plea deal puts an end to your case, which some people want to do. It doesn’t put an end to any consequences you might face, but the case itself will no longer be hanging over your head.

Cons Of A Plea Deal

Conversely, there are some downsides associated with accepting a plea deal, which include:

You’re Guilty – Even though it comes in plea form, you will officially be found guilty according to the court. If that’s something you want to avoid at all costs, a plea likely isn’t right for you.

Avoid Best Case Scenario – If you accept the plea deal, you’re also missing out on the possibility of getting the charges dropped or being found innocent. You avoid the worst case scenario by accepting a deal, but you can’t achieve the best case scenario by agreeing to one.

You Don’t Get Your Day In Court – With a plea deal, you don’t get the chance to argue you case in court. You won’t get to challenge the prosecution’s case if you agree to a plea deal, and you never know for sure how strong the evidence is against you.

Plea deals need to be evaluated on a case by case basis, and there’s no way to say that a plea deal is always or isn’t always in someone’s best interest. That’s why it’s oftentimes so helpful to have a lawyer by your side who can lay out your entire case, counter the prosecution and really help you decide on the best route to pursue. We’ve done it for countless clients in the past, and we’d love to do the same for you. To learn more during our free case review, give our team a call and set one up at (952) 224-2277.