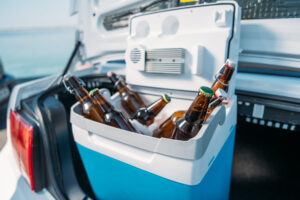 Minnesota is one of 43 states that have laws outlawing open alcohol containers in motor vehicles. This means it’s illegal to have an open beer can or open alcohol container within a person’s imminent domain while the car is in motion. As you might have guessed, there are some stipulations and exceptions to Minnesota’ s open container law. We explore all those avenues and more in today’s blog on open container laws in Minnesota.

Per the statute, it is illegal for drivers and passengers to be in possession of an open container of alcohol while a vehicle is in motion. This means that you can’t crack a beer when you’re 20 minutes away from the cabin or let your passengers drink while you take care of the last leg of a road trip. If you have an open beer in your car or a half finished bottle of alcohol in the passenger’s seat, you can be cited under Minnesota’s open container law.

So how can you avoid a citation if you’re going to be transporting alcohol? For starters, keep the product sealed in the same condition you purchased it in the store. If you have an unopened 12-pack or a sealed bottle of Captain Morgan in your car, it doesn’t matter if you keep it on your passenger’s seat, you are free to transport the alcohol because it is not considered an open container. It is still sealed, and therefore you’re in the clear.

But what if you’re bringing a bottle of alcohol to a party that you previously drank from, or you’re bringing over a container of your homemade Long Island Ice Teas to a friend’s house? These could be considered “open” forms of alcohol since they are not factory sealed, so in order to transport them safely, they must be out of arm’s reach or your immediate vicinity. In other words, you can’t have them in your passenger’s seat or even behind a seat if you can reasonably reach it from your seat. To be safe, put them in your trunk, especially if you have passengers in the back seat.

If you don’t do this, you can be charged with an open container violation even if you weren’t drinking from that alcohol source. For example, let’s say you brought a bottle of alcohol to a friend’s house, you had a couple of drinks and then you drove home. Even if you’re under the legal limit, if you’re pulled over and there’s a bottle in the passenger’s seat, the police may charge you with an open container violation on the assumption that you were drinking from that bottle. It’s your word against their version of events, but if there’s alcohol on your breath and an open container in your seat, it’s going to be tough to prove you weren’t drinking.

It’s also a good idea to keep your passengers from drinking in the car. If they are caught red handed or admit to drinking, they’ll be the one to get the ticket, but if they try to hide the bottle, it’s found and nobody claims the bottle, the citation can be reverted back to the driver. Wait until you’ve reached your destination to crack that first beer.

Finally, it’s worth noting that you are allowed to drink in a vehicle in some exceptions. You can have an open container in a boat while it’s in use, but you can also drink in your vehicle in certain situations. If you’re tailgating in the rain or you’ve parked the Jeep at a campsite, you can drink so long as the vehicle is off. In other words, if your vehicle is not on the street and it’s parked without the keys in the ignition, you should be good to go. That being said, it’s also worth reading up on “physical control” of a vehicle so you’re not hit with a DUI.

An open container violation is punishable by up to 90 days in jail and fines up to $1,000, but it an also lead to more serious charges if you cause an accident or end up with a DUI. If you need assistance challenging any alcohol-related motor vehicle offense, reach out to the experienced lawyers at Appelman Law Firm today at (952) 224-2277.