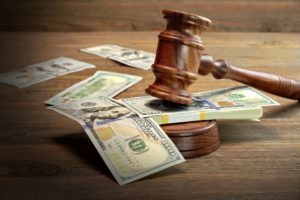 Bail is an amount of money that is set during a criminal case. If the accused posts the bail amount or secures a bail bond, they can be released from custody while their case plays out. As long as you make all your required appearances and remain within the conditions of your release, the bail amount will be returned to the individual at the conclusion of their case, less any fines or fees. If you use a bail bond company, you’ll only have to pay a small percentage of the bail amount to the company (about 10 percent), but your money will not be returned upon the completion of the case.

Your bail amount is set by the presiding judge in your case, and while there is no set formula that is used to determine your bail amount, judges strongly consider three factors:

1. The severity of your crime
2. Your risk to public safety
3. The likelihood of you showing up to your court appearances

The first thing the judge will look at is the severity of the crime as a whole. Certain felony-level offenses may prevent you from being eligible for bail or they may result in a high bail amount. Additionally, judges also examine your risk to public safety. If you’ve been caught embezzling, your risk to public safety is probably much lower than if you assaulted someone or injured someone while driving drunk. Finally, the judge looks at your likelihood of showing up to your court appearances should you be granted bail. If you’re a threat to skip town, or you’ve jumped bail in the past, your bail amount will be increased or denied altogether.

There are also some restrictions on the bail amount that can be determined. Bail amounts are limited to double the maximum fine for the alleged crime, but there are some exceptions. For example:

If you need help posting bail or defending your criminal case, please reach out to the experienced lawyers at Appelman Law Firm at (952) 224-2277.