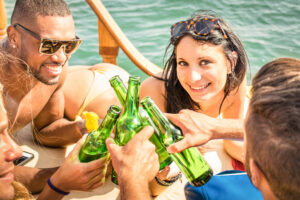 Now that the weather is warming up, we can expect to get an increase of calls from individuals who were charged with driving a boat while under the influence of alcohol. Boating While Intoxicated is similar to a Driving While Intoxicated charge you might receive while driving a car, but there are some clear differences. The biggest difference is about how the state views the Open Container law.

As you’re probably aware, it is illegal for someone who is driving a car and even for passengers to have an open container of alcohol in the vehicle with them. As Minnesota Statute 169A.35 states, “It is a crime for a person to have in possession, while in a private motor vehicle upon a street or highway, any bottle or receptacle containing an alcoholic beverage, distilled spirit, or 3.2 percent malt liquor that has been opened, or the seal broken, or the contents of which have been partially removed.”

However, if we read the full law, we’ll also note this section that states “motor vehicle does not include motorboats in operation.” In other words, boats are not subjected to Minnesota’s open container law, and either are their passengers. This means that both riders and boat operators are allowed to have an open container next to them or in their hand while their boat is parked or in motion.

With that said, it’s also important to note that boat operators are held to the same standard as car drivers. If they are found to be operating the boat with a blood alcohol content above 0.08, they can be charged with boating under the influence, which carries penalties similar to that of a DUI. It’s also worth noting that you do not need to reach the 0.08 threshold in order to be held accountable. Any boat operator who has a BAC over 0.04 who is found to be driving carelessly or recklessly can still be charged with operating under the influence, so be smart if you’re going to be taking the boat out this summer.

So while you don’t need to worry about getting a ticket for having an open beer in the cup holder or if your passengers are drinking while you’re driving the boat, that doesn’t mean you have free reign to do what you want on the water. A BWI can limit your ability to drive a boat and your car, so don’t take the charges lightly. If you or someone you know has been charged with boating while intoxicated, contact Appelman Law Firm to learn about your options.