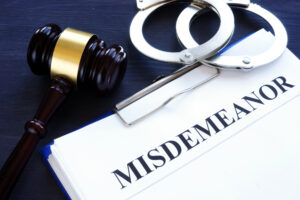 Let’s start by looking at the types of misdemeanor charges you can face. Here in Minnesota, misdemeanors come in three different forms. There are:

Petty Misdemeanors – The lowest charge. They don’t carry jail time and fines tend to top out at $300. This is reserved for certain traffic infractions and small drug possession crimes.

Misdemeanor – Most minor crimes are considered misdemeanor offenses, which are punishable by up to 90 days in jail and fines up to $1,000. Jail typically isn’t imposed unless you have previously been convicted of similar offenses, but there’s no guarantee that you’ll avoid jail for your first misdemeanor conviction.

Gross Misdemeanor – These are considered the most serious of all misdemeanor charges. They are punishable by up to a year in jail and fines up to $3,000.

Also, it’s worth noting that the prosecution has a set amount of time to bring a case against you or file charges related to a specific incident. For misdemeanors, they have two years to bring charges against you, whereas they only have six months to bring forth petty misdemeanor charges, otherwise the statute of limitations is expired.

If you have been arrested and charged with a misdemeanor, you’ll be able to secure your release ahead of trial if you post bail. Bail amount will be determined by a number of different factors, but it will not be more than twice the highest fine amount for your alleged crime. That means your bail amount won’t be higher than $2,000 for misdemeanor charges or more than $6,000 if you face a gross misdemeanor.

Finally, it’s worth noting that misdemeanors can result in more than just fines and jail time. You can be sentenced to probation, home-monitoring, be required to complete drug, alcohol or victim impact courses, have your driver’s license revoked or suspended, or be required to have a breathalyzer installed in your vehicle, and that doesn’t even factor the wide reaching implications a conviction can have on your job, your family or your car insurance rates.

If you’re charged with a misdemeanor, don’t just assume that it’s no big deal and plead guilty. Talk to a lawyer, go over your options and let them help you reach a favorable outcome. For more information or for help with your criminal charge, reach out to Avery and the team at Appelman Law Firm today at (952) 224-2277.