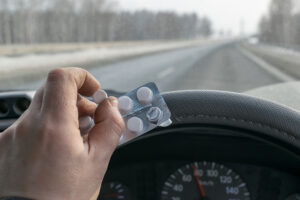 When you hear the term DUI, your head probably jumps straight to a drunk driving charge. And while drunk driving does make up the majority of DUI cases, it’s important to remember that DUI stands for Driving Under the Influence. That means if medications influence your ability to drive safely, you can be charged with a DUI even though your blood alcohol content is zero.

But which medications are okay to take, and which ones should you avoid if you know you’re going to be driving within the next few hours? We look at some of the more common medications that can lead to DUI charges in today’s blog.

For one reason or another, many people think that they can take medications and drive without worrying about a potential DUI. Some incorrectly believe that you can’t get a DUI if the medication is prescribed by you to a doctor, others simply believe their driving ability won’t be impaired, and a final group simply doesn’t realize how their reactions are being affected by medications. Others think that even if they are impaired, there’s no test to determine if they are under the influence like there is with alcohol.

However, police don’t need to find drugs in your bloodstream at the traffic stop in order to put you under arrest for DUI. If your speech is slurred, you’re having motor function difficulties or you can’t pass certain roadside tests, you can be placed under arrest absent a blood test. They may get a warrant to collect a blood or urine sample once you’re under arrest, but don’t assume that you’re in the clear because there is no roadside blood test.

Some medications that have been known to lead to DUI charges include:

Not only can you end up with a DUI if you take these medications and get behind the wheel, but you can also face felony charges if you end up causing an accident. This is why almost every medication cautions against driving until you know how the medication will affect you. Every year we handle a number of prescription drug DUI cases because people knowingly or unknowingly got behind the wheel after taking a strong medication that ended up inhibiting their ability to drive. We can help fight your charges if you end up in a similar situation, but we hope you’ll use caution and find a driver if you need to be on strong medications.

For more information, or to set up a consultation with an experienced DUI lawyer for any type of DUI charge, reach out to Avery and the team at Appelman Law Firm today at (952) 224-2277.