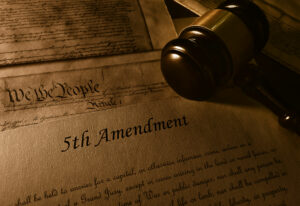 The First Amendment to the U.S. Constitution guarantees the right to free speech, so while you certainly are within your rights to speak your mind, it’s not always in your best interest. That’s where the Fifth Amendment to the Constitution comes into play. You’ve probably heard a shortened variation of the Fifth Amendment as “you have the right to remain silent to avoid self-incrimination,” but there’s so much more to it than that, and you’d be wise to learn more about it. That’s the focus of today’s blog.

The problem with the Fifth Amendment and how it is sometimes policed is that people incorrectly believe that enacting your Fifth Amendment right is a suggestion of guilt. As the old adage goes, “If you’ve got nothing to hide, then you shouldn’t need to plead the fifth.” This is wholeheartedly, unequivocally and completely false. Let’s say it louder for the people in the back.

PLEADING THE FIFTH IS NOT, NOR SHOULD IT EVER BE CONSIDERED, A SIGN OF GUILT

As made clear in Ohio v. Reiner (2001), one of the basic functions of the Fifth Amendment is to protect innocent men. It is not a get out of jail free card to be played by murderers and drug dealers to avoid conviction, it actually functions to help innocent individuals from helping the prosecution create a case against them.

You might still be wondering why it’s such a bad idea to talk to police about your involvement in an incident even if you know that you are absolutely, 100 percent innocent. To answer that question, I ask you to watch this wonderful video by Regent Law Professor James Duane. His section is about 25 minutes long, but it’s fascinating and informative. If you don’t have enough time to watch it now but still want an answer to why you shouldn’t talk to police, even if you’re innocent, focus on the parts of the lecture from 19:00-25:00.

As you can see, talking to police can lead to major problems for your case, even if you are completely innocent! If you are facing an arrest or criminal charges, the first person you’ll want to talk to is a criminal defense attorney like Avery Appelman. We can explain how you’ll want to handle the interaction with police and set you up to help beat any potential charges. For more information, or to contact our office for assistance with your case, reach out to our firm today at (952) 224-2277