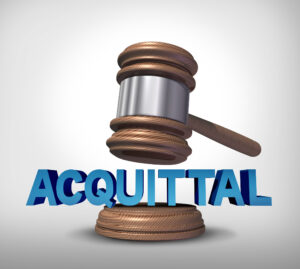 An acquittal and a not guilty verdict are terms that are oftentimes used interchangeably, but there are actually some subtle differences between the two. Both are favorable to the defendant, but it pays to know the difference between being acquitted of the charges and being found not guilty of the charges. We explore those differences in today’s blog.

Acquittal And Not Guilty

Let’s just dive into the two definitions in order to better explain the small differences between an acquittal and being found not guilty.

Acquittal – If a defendant is acquitted, it means that the prosecutor failed to prove the defendant’s guilty beyond a reasonable doubt.

Not Guilty – If a defendant is found not guilty, it means that they are not legally answerable for the criminal charges filed against them.

When you are acquitted, you cannot be prosecuted for the same specific crime under what’s known as “double jeopardy.” This clause limits the government’s ability to prosecute a defendant twice for the same offense. The Fifth Amendment to the US Constitution prohibits prosecution for the same offense after an acquittal, although that doesn’t mean you can never be charged with that same crime as a whole, just for that specific incident. For example, if you were acquitted of murdering your wife, you can’t again be charged for her murder, but if you become a suspect in your second wife’s murder, you can again find yourself facing murder charges since it’s pertaining to a different incident.

Finally, it’s also worth noting that regardless of whether you’re found not guilty or you’re acquitted, you can still face a civil trial that results in monetary damages being awarded to the victim. That’s because there is a lower standard of proof in civil cases. Even if you are acquitted, you should prepare for the possibility of a civil trial. Avery and the team at Appelman Law Firm can help better explain this process and assist with all your criminal and civil liability needs if you’re facing charges or the possibility of a lawsuit.

If you want help achieving one of these desirable results for your case, pick up the phone and contact Avery and the lawyers at Appelman Law Firm today at (952) 224-2277.