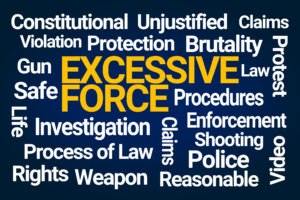 Needless to say, tension between the public and police officers in Minnesota is heavy right now, and now more than ever it is important to know your rights when it comes to interacting with police. We want you to be informed when talking with police, but it’s also important to avoid escalating the wrong situation. Below, we’re going to take a closer look at when police are legally allowed to use force during the scope of their employment, and how you should go about documenting and reporting instances of excessive force.

Excessive force is a little difficult to understand because it’s not exactly black and white, and it can be extremely hard to prove in the court of law. As the law is written, police in Minnesota are allowed to use “reasonable” force during the nature of their duties. That means the can use justified force when conducting an arrest, executing a search warrant or during other aspects of their regular duties.

Excessive force happens when the force being used by police is no longer reasonable for the circumstances. Some examples of excessive force include:

As you can see, even in our detailing of the crime of excessive force, it’s difficult to explain exactly what it is. There are times when a police officer absolutely needs to tackle a suspect to the ground, and there are other times when it’s absolutely uncalled for in the moment. It is up to their determination as to what is considered reasonable. Because of this, and because of the elements police officers work in, you can see why it would be so hard to not only get charges brought against an officer for excessive force, but to win a case.

Under Minnesota law, a police officer who fails or refuses to perform their duty, acts knowingly in excess law of authority, unlawfully injures another person under pretense, or makes a false report can be sentenced to up to one year in jail and face fines up to $3,000.

Because their is no definitive standard, it is imperative that you collect as much evidence as possible to prove your case. You are legally allowed to record an interaction with police, so long as you are not interfering with their duties or the duties of emergency personnel, so we always recommend that you record the incident if possible. Other items you’ll want to record from the incident include:

From there, you’ll want to file a complaint with the police department where the officer works. If you need help with where to file, contact a defense or personal injury lawyer, depending on your scenario. It’s going to be an uphill battle to get justice, so make sure you reach out to a legal expert to learn about your best moves. For more information, contact Avery and the team at Appelman Law Firm today.