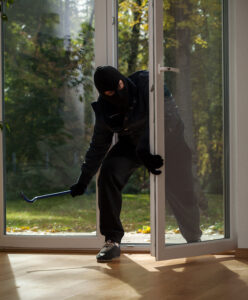 Here’s a quick look at what constitutes each of these crimes in Minnesota:

Theft – We’re going to start with the definition of theft because it is helps lay the framework for the other two crimes. Theft is defined as the act of intentionally taking someone else’s property without their permission. It can be taken momentarily or permanently, but if you take it without permission, it is considered theft. The item taken can also be services. For example, while pickpocketing and shoplifting are common theft examples, so too is failing to pay someone for work performed or writing checks that you know will bounce for items or services. Theft of items valued under $500 are usually considered a misdemeanor offense, punishable by up to 90 days in jail and fines up to $1,000. As the value of the items taken increases, so do the charges and potential penalties. Felony theft can results in tens of thousands of dollars in fines and decades in jail.

Burglary – Under Minnesota law, burglary is defined as the act of entering someone else’s home without permission with the intent of committing a crime. The intended crime does not need to be theft in order for the intruder to be charged with burglary, but it is considered the most common reason for entering a dwelling without permission. For example, if you break into someone’s home in order to damage their possessions or hurt them, you’ve committed burglary, among other crimes. Gross misdemeanor burglary is punishable with fines and up to a year in jail, while felony burglary can carry up to 20 years in prison.

Robbery – Robbery is defined as committing theft while using force or the threat of force. Breaking into someone’s house while they are gone and stealing their safe would constitute burglary and theft, but not robbery. However, going up to someone on the street and saying “Give me your purse or I’ll cut you with this knife” would lead to robbery charges. If a weapon is used or the victim is injured by the perpetrator, the charge would be upgraded from simple robbery to aggravated robbery. Felony aggravated robbery is punishable with thousands of dollars in fines and up to 20 years in prison.

At Appelman Law Firm, we’ve helped countless individuals defend themselves against all of the above charges, so if you or someone you know is facing burglary, theft or robbery charges, reach out to Avery Appelman and his team for assistance with your case. Call us today at (952) 224-2277.