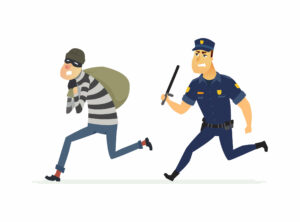 If you’re stopped by police or you see flashing lights in your rear view mirror, it’s best to acquiesce with their request for an interaction. Most people do just that, but every so often a suspect decides to make their situation worse by trying to run for it. When they get caught, not only will they face their original charges, but they’ll face additional charges for trying to flee from the police. Below, we take a closer look at how fleeing from police charges are handled in Minnesota.

Fleeing From Police In Minnesota

Running from the police may seem amusing when it’s portrayed on television and in movies, but it is a serious crime with serious penalties in Minnesota. If you try to run from police on foot, or more commonly, in a motor vehicle, you’ll be charged with attempting to evade a police officer. This carries significant potential penalties, but if a pedestrian or law enforcement officer was injured as a result of your attempt to flee, penalties will be upgraded.

But what exactly constitutes fleeing? If a police officer comes up to a crowd and tells everyone to stay put and you start walking away, is this fleeing? It really depends on the situation. By the letter of the law, you are considered to be fleeing from police if you do not respond to an officer’s direct request to stop. In the situation above, you’re probably not fleeing if you start to walk away, but if an officer spots you and yells “You in the blue shirt, stop and come back here,” and you continue to walk or run away, you might be hit with a fleeing charge.

One exception to the situation is that you were unaware that you were disobeying a direct order. For example, a driver may not realize they are being followed by police for a couple of minutes. During this time, the officer may determine that you were attempting to flee. You can argue that you weren’t aware of their presence, but if they were clearly behind you for a long time, you could face fleeing or inattentive driving charges.

The same scenario can play out on foot. As Airpods become more popular, it wouldn’t be surprising to hear of a situation where police tried to stop someone who seemed to be disobeying commands when in actuality, they couldn’t hear the officer because they had their headphones in. In most instances the officer can assess the situation and realize the individual was not intentionally disobeying a command, but if the officer is having a bad day they make decide you were willfully ignoring their request and charge you anyways.

Fleeing on foot is considered a misdemeanor offense, punishable by up to 90 days in jail and fines up to $1,000. Because of the inherent risks associated with fleeing in a vehicle, Minnesota punishes these cases more seriously. Attempting to flee in a motor vehicle is considered a felony offense, punishable by up to three years in jail and fines up to $5,000. A judge may go easier on you depending on the situation. For example, if you had a momentary lapse in judgment and fled for a minute before stopping, odds are you won’t see jail time. But if you tried to flee and caused an accident, expect to serve some time behind bars and face stiff fines. Fleeing and causing death carries a maximum of 40 years in jail and fines up to $80,000, so don’t risk everything by trying to run from police.

If you are facing charges after attempting to run from the cops, learn about your legal options by contacting Avery and the team at Appelman Law Firm today.