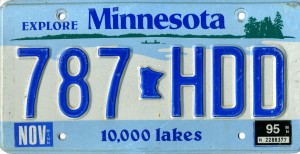 License plate reading (LPR) technology is a relatively new tool for police to use in their fight against crime. Much like the the electronic system Batman uses in The Dark Knight to find The Joker, in the right hands, the technology can do a lot of good. It can quickly scan the license plate and tell the officer if the driver has a suspended license or an outstanding warrant. But, used poorly, the data the devices collect can compromise the privacy of innocent citizens.

For that reason, Minnesota lawmakers are once again attempting to regulate just how long police can hold onto data collected from these high-tech devices. This will mark the third time since their statewide inception in 2012 that lawmakers try to determine how long data on innocent drivers should be held.

Lawmakers seem to hold one of two views when it comes to storing license plate data collected from drivers who have no reason to be suspected of any wrongdoing. One group of lawmakers believes the data should be deleted immediately, while the other group thinks the data should be stored for 90 days prior to deletion. Neither side could reach a compromise in 2013 or 2014, and no bill was able to reach a final vote before the legislative session closed. Under the current system, law enforcement is holding the data indefinitely until the Legislature comes to a decision, although the data is not classified as public.

Both groups are championing a different cause in hopes that their bill will win favor. For Sen. Ron Latz, DFL-St. Louis Park, he believes 90-day data collection can provide authorities with more information to track down criminals. Citing the case of Brian Fitch Sr., the man accused of killing Mendota Heights police officer Scott Patrick, Latz noted that cops were able to close in on Fitch by looking at LPR data to determine where Fitch had been in the past months in order to reason where he might be in the aftermath of the shooting. Police officers at Fitch’s trial said the LPR data is a vital tool that can’t be used to its fullest extent if the data is deleted immediately.

On the other side of the ball, Sen. Branden Peterson, R-Andover, believes his zero-retention bill is best for protecting the privacy of average citizens. He says police already have so much information on innocent civilians that there’s no room for compromise when it comes to LPR data.

“What we know about law enforcement is that they will operate to the fullest extent possible inside of the law, and the more data that they have at their disposal, they’ll use,” Petersen said. “If you couple LPR data with other mechanisms that are used to collect data en masse, you can, without ever establishing probable cause … paint vivid pictures of people’s everyday lives.”

So do you think? Should the data be stored for 90 days, deleted immediately, or is there a better solution out there?