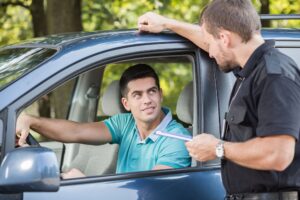 If you are pulled over and the officer suspects that you are over the limit, the last trick you may have up your sleeve is to use your words to get out of the situation. In our experience, a lot of tactics don’t end up doing the trick, but we have found there is one phrase that significantly increases your chances of avoiding having a DUI on your record. We share that six word phrase in today’s blog.

Talking Your Way Out Of A DUI

There is one phrase that we genuinely believe you can use to put yourself in the best position to avoid having a DUI on your record, and that phrase is…

No the phrase isn’t going to get you out of trouble at your first point of contact with the police officer. In fact, unless you’re a high ranking law enforcement official, we haven’t heard of a way to talk the officer out of arresting you during the traffic stop if you’re over the limit. However, requesting to talk to a lawyer will put you in the best position down the road to beat the DUI charge.

You’re not going to be able to explain that you’re only a couple blocks from home or that you’re just barely over the limit and that the officer should just let it slide. In fact, trying to talk your way out of an arrest can easily make the situation worse, especially if the officer believes you are trying to to bribe them. Also, if you try to explain away the situation by saying you “only had a few beers” or you thought you’d be fine because the bar is so close to your house, all the officer is going to hear is that you admitted to drinking alcohol, and that will only serve to make your case harder to win in court.

At the end of the day, it’s extremely unlikely that anything you say during your interaction with police will help your case, let alone get you out of the DUI. It’s best to just pack it in, avoid giving police any further evidence, and letting an experienced criminal defense attorney challenge the charge in court. Doing this will substantially increase your likelihood of avoiding a DUI conviction.

So if you are ever pulled over and suspected of driving under the influence, mutter those six words and put yourself in the best position to avoid a DUI charge. Just say “I’d like to call a lawyer.” And you can contact one today by calling (952) 224-2277.