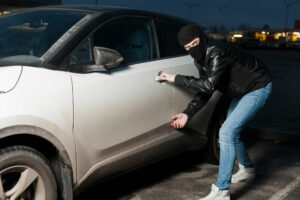 We usually see a rise in car thefts in Minnesota during the winter when people leave their car running in their driveway to allow it to warm up a bit before they get inside, but car theft trends have continued to surge in the spring. Oftentimes these crimes are considered crimes of opportunity, but many thieves also make a conscious plan to take someone else’s vehicle and pick their moves carefully. It’s not always about jumping in a car that’s running or forcing a driver out of a running vehicle. In today’s blog, we take a look at four actions that can end up resulting in car theft charges in Minnesota.

Types Of Car Theft In Minnesota

While the nature of these actions differ, at the end of the day, odds are you’ll find yourself facing the same car theft charges as anyone else on this list.

Simple Theft – When you think of a car theft, you probably picture something along the lines of a simple theft. This is like when a person jumps in an idling vehicle or uses a weapon to force someone out of their car before commandeering it. Obviously a theft with a weapon or threat of force will result in more serious charges, but this is the most common type of incident that results in car theft charges.

Joyriding – While some thieves steal vehicles in order to get them to a chop shop and make money on the parts, other car thefts aren’t as sinister in nature. Sometimes a teen will jump in a idling car just to take it around the block or to use it to get across town before parking it and leaving it. It may not seem like a huge deal, but if you’re caught joyriding in someone else’s car without their permission, you can face vehicle car theft charges.

Failing To Return A Rental – If you fail to return a rental vehicle when you’re supposed to, you might not just be hit with additional fees, you could face criminal charges. They won’t be put in place the second you miss your return window, but if you don’t follow up with the rental agency, they may end up filing a report with police. The same goes for individuals who use fake credentials in order to rent a vehicle with the idea of never returning it.

Failure To Receive Permission – This one is similar to the joyriding concept, but it deserves its own category. If you take someone else’s vehicle without their permission, even if you know the person, you can be hit with car theft charges. Even if you’ve had their permission in the past or you think it’s just an innocent prank, it’s not unheard of for a situation like the one described about to turn into a car theft situation.

If you have been charged with vehicle theft and now face stiff penalties, know that it’s almost always in your best interest to talk everything over with an attorney before making any decision about your case. For more information, or to set up that free consultation with a lawyer, give Avery and the team at Appelman Law Firm a call today.