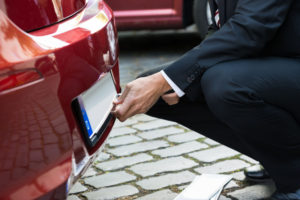 One of the many potential punishments you may face after a DUI arrest is the impoundment of your license plates. But what does it mean when the state confiscates your license plates, and how can you get them back? We explain how the impoundment process works, and why it’s imperative to challenge your drunk driving charge in the court of law if you’ve been arrested for DUI.

Why Are License Plates Impounded In Minnesota?

Not every drunk driving arrest will result in the forfeiture of the driver’s license plates. There have to be certain factors present in order for the state to confiscate the plates. Those factors include:

If any of the above factors are present, the arresting officer or a judge can issue an order for an impoundment of license plates. Here’s where the process can get messy, and why it’s so important to contest the charge in court. For starters, the license plate impoundment will go into effect on the vehicle that was used in commission of the crime. This means that if you lent your friend the car, or your took your parent’s vehicle with or without permission, the plates will be impounded for that vehicle, leaving them without reliable transportation.

But it doesn’t stop there. The impoundment order also applies to any vehicles registered to the offender who has been arrested. If the vehicle is registered or leased in your name, even if you’re just a joint owner on the registration, the plates for that vehicle will be impounded. Many families list both the husband and wife on the vehicle registration, so if one spouse gets a DUI, plates may be impounded for all family vehicles. This can turn into a nightmare for families.

Next Steps After Plate Impoundment

If your plates have been impounded, they will remain that way for a minimum of one year unless the charges are dropped or reduced. However, during this time that they are impounded, drivers or their family members can apply for temporary license plates. This will allow you to drive while your plates are impounded, although there may be some restrictions.

You may have heard about these plates in Minnesota. Temporary plates always start with the letter W, and since temporary plates are most often given after a plate impoundment for drunk driving, the temp plates have earned the moniker “Whiskey Plates” around the state.

If an order has been made for your license plate impoundment, that’s not the final say in the matter. You have 30 days from the date of the order to file a petition requesting a judicial review of the impoundment order. A criminal defense lawyer can help file this in conjunction with fighting your DUI case. During the judicial review, you or your lawyer will need to make a strong case as to why your plates should be returned. We’ve helped clients avoid plate impoundment in the past, so if you are facing a DUI or the loss of your license plates, reach out to the experienced lawyers at Appelman Law Firm Today.