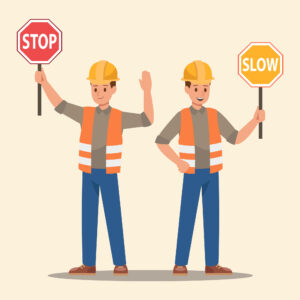 We’ve highlighted a number of the new laws that went into effect on August 1 in past blog pieces, but another change that went into law earlier this month is just starting to make headlines. We’ve already talked about the new hands-free driving law and the left lane slowpoke law, but we also want to point out a new law that could lead to a citation if you drive carelessly through a construction zone.

According to the new law, construction zone flaggers, oftentimes the first worker a driver will encounter as they approach a work zone, can now call police to report any driver seen driving unsafely through a construction zone. These flaggers often hold flags or signs that say “Stop/Slow” in order to ensure approaching drivers maintain a safe speed and watch for workers, but sometimes drivers fail to heed those warnings, and that puts the construction workers at risk.

Under the new law, the flaggers can now report drivers to law enforcement within four hours of the incident. More importantly, law enforcement can then issue a citation to those drivers, even if they don’t witness the infraction themselves, if they believe that the person was driving unsafely.

Minnesota Governor Tim Walz spoke about the new law on Friday near a highway in a construction zone in St. Paul.

“Work zones are incredibly dangerous. The flaggers who are the first ones in those work zones in many places are at risk,” he said. “This piece of legislation, just to let people know: You come into a work zone, and you disobey what the flaggers are doing, you put people at risk. Those flaggers are now empowered to take down that driver’s license number, and you will be getting a talk-to by State Patrol.”

It’s clear why lawmakers added the new law, as over the last three years there have been an average of 10 fatalities and 41 serious injuries in Minnesota work zones every year. And while it hopes to help curtail poor driving in construction zones, in theory it’s one of the easier citations to contest because the officer giving out the ticket did not witness the infraction. If it’s your word versus a story the cop has been told, you have a better chance of winning than when you take a DUI charge to court and the officer says he saw you swerving with his own two eyes.

That’s not to say that you should drive poorly through construction zones because you can always contest the ticket, but if a mistake happens and you end up with a citation that was called in by a flagger, make sure you contact Appelman Law Firm to talk about your best options for contesting the ticket. We’d be happy to help put together a strong case to help you avoid a fine and keep your license, so consider setting up a free consultation with our firm if you’ve received a traffic ticket.