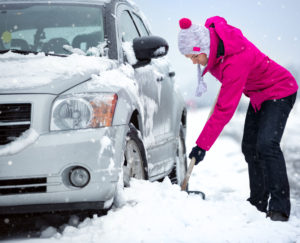 Thousands of Minnesotans do it each and every day during the winter months. They run outside, start their car, then head back inside to pour their cup of coffee and pack a lunch before heading back outside to a car that’s hopefully a little warmer than before. Nobody likes getting into a car that’s the same temperature as the weather, so while it seems harmless to let your car run unattended while it warms up, you can actually earn a ticket for doing so here in Minnesota.

Warming Up Your Car Law

Most police officers view the crime of letting your unattended car warm up in the same light as going one or two miles over the speed limit. Sure, by the letter of the law you are committing a crime, but there are bigger fish to fry, so to speak. That being said, it’s not unheard of to be cited for leaving your idling car unattended.

Michigan has a similar law, and one resident made national news when he recently received a citation for leaving his running car unattended in his own driveway. Taylor Trupiano is the man at the center of the controversy, and he couldn’t believe an officer was ticketing him on his own property.

“I thought it was some kind of joke at first, and then I was thrown back by it,” he said. “I was really surprised.”

Just like Minnesotans, Trupiano said he was just doing something that many Michiganians do every winter when the temperatures drop. He said he only let his car idle for a few minutes, but during that time frame an officer ticketed him and left the scene.

“I was in and out in probably about 7-8 minutes,” he added. “So in that amount of time he ran up here, gave me a ticket and by the time I got out he was nowhere to be seen.”

So why is it such a big deal to leave your car running for a few minutes to let it warm up? As we mentioned right around Christmas, the Twin Cities were dealing with a huge spike in car thefts. The common theme in all the cases was opportunity. People had left their cars unattended and idling, meaning thieves only needed a couple of seconds to make their move and be off with the vehicle.

However, there is one way you can get around this rule in Minnesota and still have a toasty car to step into on cold days. Under Minnesota law, it is illegal to leave the car unattended and running with the keys in the ignition. But, if you have a remote starter installed, you can start your car without putting the keys in the ignition. This means if a would-be robber jumped into your idling car, they couldn’t go anywhere because the keys still need to be inserted into the ignition to move the vehicle. So if you want to jump into a warm car during the cold winter months, consider investing in a remote starter.

For more information on Taylor’s ticket, check out this video by a local news channel in Michigan.