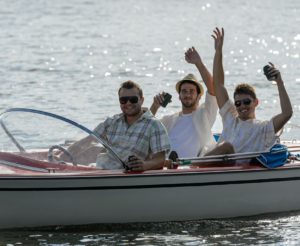 If you plan on ringing in America’s independence on the lake this upcoming weekend, make sure that you have a sober boat captain, because police will be out in extra force looking for inebriated drivers.

According to the news release, the Minnesota Department of Natural Resources, the Minnesota State Patrol, county sheriff’s offices and other public agencies will work together to conduct extra boating while intoxicated enforcement over the upcoming holiday weekend, which runs from July 5-7. The targeted campaign is part of a larger effort called Operation Dry Water, a year-round national campaign with the goal of reducing boating accidents and deaths that are caused by drivers under the influence of alcohol or drugs.

A closer look at fatal boating accidents last year revealed that alcohol was a factor in half of the accidents, which is higher than any mark over the previous five years. So if you are caught operating a boat under the influence, don’t expect to be let off with a warning, because the consequences can often be deadly.

As we’ve talked about on the blog in the past, the same 0.08% blood alcohol content is used to determine if a driver is under the influence whether they are driving a car or a boat. The main difference is that a boat captain can have an open intoxicant with them while they are driving a boat, whereas doing so in a car or truck is illegal. However, even though you are legally allowed to drink while you’re operating a boat, you need to make sure that you keep it in check. If you go over that 0.08% threshold, you can be arrested for boating while intoxicated if a warden wants to stop you for a sobriety check.

Police know that this will be a big weekend for boating and drinking, so they are going to be posted up at hotspots near the lake. You can expect them to have a presence at popular boat landings and on nearby roads to look for people who may have had too many to drink while on the boat. You can be under the influence as a passenger on a boat, but if you drive your own car home after a day on the lake, you can easily end up with a DUI.

This is always our busiest season for BWI charges, but that also means that we have a lot of experience when it comes to defending clients against a boating while intoxicated charge. A BWI can result in the forfeiture of your boat or your regular driver’s license, so don’t assume that it’s a situation where you should plead guilty. Fight the charges by hiring legal representation who can help you keep your boat and driving privileges. We answer our phones 24-7 throughout the holiday weekend, so no matter when you run into trouble, know that we can help you day or night. Contact us at (952) 224-2277 for a free case review.