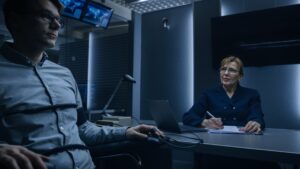 Police and other law enforcement officials have a number of different techniques in their arsenal for getting suspects to admit to a crime or give up information that will hurt their case. While they can’t physically harm a suspect, police can blatantly lie to a suspect in the hopes that it will get them to confess to a crime or implicate someone else. It’s imperative that you are aware of these deception techniques if you ever find yourself being questioned by police.

Why Can Police Lie To You?

There’s really no good answer to that question. Police are allowed to deceive suspects during questioning in order to obtain information about the case, even if they are knowingly lying to the suspect. This works in contrary to most other aspects of law enforcement, like when it comes to reasonable suspicion. Police need to have reasonable suspicion in order to conduct a traffic stop, but even if they are misinformed, if they are acting in good faith, the traffic stop may still remain valid. For example, if a call went out to be on the lookout for a driver of a Red Camaro near 1st and Main, but the officer misheard the dispatcher and stopped a driver of a Blue Camaro near that same intersection, and it turns out that driver is drunk, that DWI arrest can remain valid even though there was no valid reason to stop the driver in the first place because the officer’s intentions were rooted in good faith.

The same can’t be said about deceptive interrogation tactics. Police can knowingly act in bad faith in order to get a person to admit to something. And while they can’t physically harm a suspect, they can pretty much say anything to the suspect, even if it’s knowingly false, in hopes of obtaining a confession.

Here’s a look at some of the more common deception techniques that police may use in order to obtain a confession or get a suspect talking:

All of this is completely legal, and know that you’re not going to be able to talk your way out of a situation by giving police the information they are looking for. Instead, your best bet is to remain silent and avoiding implicating yourself further. Or better yet, demand that you have access to a lawyer before you make any statements. You are entitled to a lawyer and police cannot continue with an interrogation against your will if you request a lawyer, so get a professional in your corner before saying anything else.

Don’t fall for these deceptive tactics and make your case worse. Stay quiet and reach out to a criminal defense lawyer like Avery Appelman. We’ll fight for your rights and ensure they aren’t infringed upon. For more information or for help with your case, give our team a call today at (952) 224-2277.