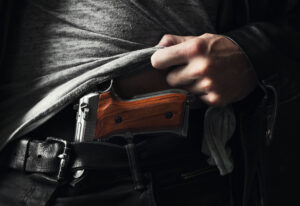 The second amendment to the US Constitution grants citizens the right to bear arms, but that doesn’t mean you can just buy a gun and carry it around as you please. There are both state and federal regulations that govern how citizens can legally carry firearms, and considering the recent news that a record number of Minnesotans possess gun permits, we thought it would be a good idea to brush up on some of these laws and the potential penalties for violating them. Below, we take a closer look at gun possession laws and penalties in Minnesota.

While illegal possession of a weapon may be the most common type of weapons-related charge, there are a number of different crimes associated with illegal weapons use. Some of those crimes include:

We’re not going to pour through the penalties for each of the above crimes, but they tend to become more severe based on the circumstances. For example, illegally transporting a weapon on your way up north to hunt likely won’t be punished as severely as being caught trying to purchase a weapon using false credentials. But before we dive deeper into those penalties, let’s take a look at illegal possession charges.

A number of different groups of individuals are unable to legally possess a firearm in Minnesota. Some of those groups include those who are/have:

Again, penalties vary based on the circumstances, but let’s go through some examples. If you are found to be in possession of a handgun without a valid permit, you will likely face a gross misdemeanor charge punishable by up to a year in jail and fines up to $3,000. Subsequent violations will be upgraded to felonies. A similar pattern occurs if you are found to have a BAC above 0.04 while in possession of a handgun. You could face a misdemeanor or a gross misdemeanor for a first violation, and you could also have your permit to carry revoked for a year. Needless to say, you need to make sure you’re following all possession laws, because the penalties are stiff.

Other gun crimes and potential penalties include:

Finally, it’s worth noting that ignorance is not a valid defense. Not knowing or being aware of the regulations governing gun possession will not get you out of the charges, so learn the laws and adhere to them. If you end up in trouble from unknowingly or knowingly breaking a firearm law, reach out to the experienced lawyers at Appelman Law Firm today.