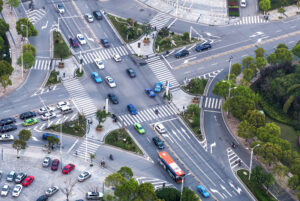 Police are expected to protect and serve the community, but it’s important that they have a thorough understanding of the laws they enforce, otherwise all hell can break lose. We recently read about a case where a driver had his DUI rescinded because the police officer didn’t know the ins and outs of the laws he has enforcing. And while that certainly doesn’t excuse the actions of the driver, it should be a lesson for all involved that proper protocol needs to be followed at all stages of an arrest in order to earn a conviction.

Before we dive into the case, let’s set the scene and see if you are aware of the law. You come up to an intersection that is four lanes in all directions, meaning there are two roads each heading north, south, east and west. You approach a stop light while waiting to make a left turn across traffic. You get the green arrow to turn, but as you’re making your left turn, you turn into the farthest of the two lanes available to you, instead of staying in your lane and entering the nearest lane heading in your new direction. Was that a legal maneuver, or was that illegal?

While you may get honked at by someone on the opposite side of the stop light who was planning on making a right turn on red into their nearest (your farthest) lane, your move isn’t actually illegal. Pulling into the outside lane while making a left turn may be impolite or violate assumed driver etiquette, but it’s not actually against written traffic laws. A Minnetonka police officer did not know that this was the case when he witnessed what he thought was an infraction back in September of 2018.

During that incident, the officer pulled over a Minnetonka man for what the officer believed was an illegal left turn. During the traffic stop, the officer had reason to believe the suspect was under the influence. The driver was eventually arrested and had his license revoked because of the incident, and he was convicted of the criminal charges.

However, on appeal, the man challenged that the initial traffic stop was illegal, and thus any evidence collected after the fact could not be legally used against him. The Minnesota Appeals Court heard the case and eventually handed down a recommendation to the Hennepin County judge handling the case to rescind the revocation of the man’s driver’s license. In their decision, the Appeals Court noted that the state law does not require a motorist to enter the innermost lane of a roadway when making a left turn, and thus the officer did not have reasonable suspicion to conduct a legal traffic stop.

This doesn’t mean you should always take wide left turns, because you will still have some fault if you hit someone who believes that far lane will remain free, but at least you shouldn’t be pulled over because of the maneuver! If you want to challenge any part of your case, from the evidence to the initial police encounter, let us go to battle for you. (952) 224-2277.