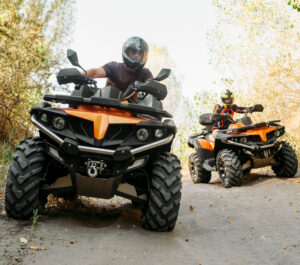 Memorial Day is in the books, and that means 4-wheeling season is in full swing. If you like to take your ATV through the trails to get away from the busy city, know that even though you may be miles away from civilization that you still need to abide by the rules of the road. If you’re not careful, you can end up in handcuffs as a result of some poor decision making behind the wheel, and it can also affect your actual driver’s license. We take a closer look at ATV and 4-wheeler DUIs in Minnesota in today’s blog.

Many people feel that since there’s less traffic on the trails and a reduced risk of causing a major accident to others like they might on the highway, that they can get away with drinking and driving on a 4-wheeler. ATVs also lend themselves to drinking and driving more than a standard car, as many 4-wheelers have built in storage compartments for alcohol, the trails tend to go by bars and restaurants, and you may feel more naturally secluded to be able to pull over and drink on the trail.

All of these factors contribute to thousands of ATV-related DUIs in Minnesota each year, and many of these individuals are surprised to learn just how serious a 4-wheeler DUI charge can be. Back in 2018, the penalties for recreational vehicle DUIs were increased in the wake of the death of an 8-year-old boy who was struck and killed by a drunken snowmobiler. Since then, persons convicted of a DUI on certain recreational devices will lose their licenses for a set period:

Simply put, a DUI charge on an ATV, snowmobile or boat is no laughing matter, and it can have consequences for your driver’s license, which may bring along many more real-world repercussions. If you’re caught under the influence on a recreational device, don’t just plead guilty because you assume you’ll get off easy because it was a first offense. Let us go to court on your behalf and work to restore your driving privileges while also working to keep you out of jail. For more information on how we’ll do this, reach out to Avery and the team at Appelman Law Firm today at (952) 224-2277.